Growing up, I always liked the story of Elijah on Mount Carmel. Now I see that it shows problems with God.

I was once involved in a short film, Baal vs Yahweh, where time-travellers met Elijah and saw the confrontation on Mount Carmel. And I think its trailer gets at the heart of why I loved the Elijah story:

What could be more convincing than that?

It presents a god who is visible and active and proven beyond doubt. However, today we don’t see that kind of activity at all. And we have no way of observing the story world to confirm that it really happened.

I often see this graph floating round the internet: 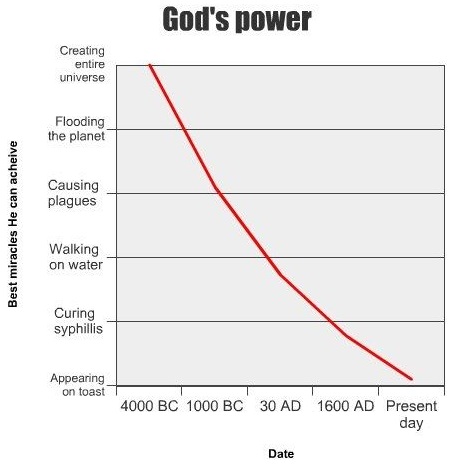 I think it illustrates the major disconnect here. All the stories of God’s great power are in the distant past where we can’t verify them. So why should we believe them if we can’t see similar things happening today?

Why can’t God reveal himself now?

Last time I wrote about my experience of a promise from Mendelssohn’s Elijah. Supposedly, if we sought God truly, we would find him.

However, that’s different from what happened in the Elijah story. The nation of Israel didn’t have to specifically seek out God. Instead, they were forced to see fire sent by God, just because one man prayed for it.

Today it’s not an indifferent nation, but fervent believers who are genuinely seeking God. And we didn’t ask for a dramatic sign, just for some reason, any reason, to continue to believe in the God we had spent our lives worshipping. How come we didn’t get it? Are we less deserving? Or is he less powerful?

I think the answer from believers is pretty clear: Send in the spin doctors. As Yuval Noah Harari puts it in 21 Lessons for the 21st Century:

In this case, the explanations I’ve heard are usually about the importance of faith and of free will. God wants to leave us with free will, so he can’t force his existence on us (by, y’know, providing actual evidence).

That would be bad enough if we were debating a simple matter of fact. However, I think it gets darker: Our lack of belief is supposed to have eternal consequences, even though we were given no reason to believe.

Mount Carmel today has a statue of Elijah, and I think it shows a big problem with the story:

Consider this section from Mendelssohn’s Elijah:

Once fire from heaven had proved Yahweh the true God, Elijah ordered the killing of all the prophets of Baal (the false god). This isn’t just a few people, either. According to the story, Elijah was standing by himself against 450 prophets of Baal, and maybe 400 prophets of Asherah as well.

We’re supposed to believe that they were the bad guys who led Israel astray, so they deserved death. And that’s certainly how I took it when younger: They were following the wrong god and persuading others to do so too. What could be worse?

Why were none of the prophets of Baal impressed?

Even in story land, this story has a problem. Yes, fire fell from heaven and convinced every Israelite that Yahweh was the true God. Great.

But why didn’t it convince any of the prophets of Baal? There were 450 of them - surely at least one of them should have realised Yahweh was the true God, turned their back on Baal, and accepted Yahweh? Or were they the religious experts who knew the trick Elijah used and were just sorry they hadn’t managed it themselves?

I know they’re set up as the storybook villains, blundering around the altar in desperation for hours, but surely even villains can sometimes recognise they’re wrong?

Honestly, I think this story makes more sense as a political struggle: Elijah was outnumbered, but was a canny operator and was somehow able to rig the contest and sway public opinion. Maybe the prophets of Baal saw through his trick, or maybe they didn’t, but either way they had supported the rival faction and needed to be purged.

This isn’t just about legends of the past. Many Christadelphians would view me as a false teacher, deliberately criticising the One True God.

Long ago, when I was in Sunday School in Denver, I was given a book on Elijah. Here’s what it has to say about this slaughter:

Elijah was determined upon the complete extermination of the false prophets according to the Law of Moses. This stringent rule will be reinforced in the age to come when the world will be rid of all such false prophets.

That’s right: I was being taught that these kind of religious purges were normal and just, and I hadn’t even reached double digits yet. No wonder it took time to work through it as an adult.

This indoctrination left the message “God is always right” deeply embedded in my mind. Not tolerance, not love, but a belief that there was a time of judgement coming, and that teaching worship of the “wrong god” was worthy of death.

Each denomination is different, but I think most Christian denominations would condemn unbelievers like me to Hell, no matter how moral or otherwise their actions are. Depending on the denomination, they may similarly condemn Muslims, Jews, and members of rival denominations.

And this leads to the dark side I hadn’t even considered in my last post: When we beg for God to give us reasons to believe and he doesn’t, this sets us up for future judgement.

Why should we be held responsible for God’s failings?

God apparently has the power to convince everyone he is the One True God. And it’s so important to him to be known correctly that he will severely punish anyone who doesn’t believe in him properly. And yet he makes no attempt to use this power to give even fervent believers reasons to believe.

Why not? And why are we the ones held guilty here?

Some believers seem completely fine with this. I suspect a lot are uncomfortable with it, or try to rationalise it with thought-stoppers like “God’s ways are higher than our ways”. But the bottom line is that they have to come up with ways to make us wrong, because their god is never allowed to be wrong.

I now see this with new eyes, and it’s shocking how much this god gets away with. Why the hell should we care about this god when he clearly doesn’t give a damn about us? Why should we keep up the fiction that God is always right, and it’s his poor, broken creation (created in his image, remember) that’s always at fault?

Perhaps this is another reason why believers might want to discredit our stories: They show their god in a bad light. After all, “Unbelievers are in deliberate rebellion against God” sounds way better than “Many believers have struggled desperately to try and hold onto their faith, and God will punish them eternally for their failure, despite not lifting a finger to help”. That just makes God sound petty and vindictive.

From Baal to Baha’i

Before Covid-19, I was planning to visit Israel last month. When looking at Mount Carmel, I was impressed by this image:

I think this highlights the disconnect between the story world and the real world. In the story, it was on this mountain that Elijah rebuilt the altar to Yahweh, defeated Baal, and proved that Yahweh was the One True God. However, right now the mountain contains this shrine: The second holiest place for the Baha’i faith, and a designated UNESCO World Heritage site.

It seems Elijah’s victory was temporary at best.

I re-read my notes for a talk on Elijah I gave in 2009. At the time I clearly thought “love of money” was a bigger danger to my faith than “science” or “evolution”.

Now, though, I can see that the biggest threat to my faith was reality. Accepting evolution played a part in that, but it was only a small part.

I think the best explanation for the disconnect between the stories of God’s incredible power and the reality is that they are just stories. It’s not that God’s vindictive: He doesn’t give us reasons to believe because he doesn’t exist.

We are on our own, but we have the ability to work together to do things the gods themselves couldn’t do.

This leaves me free to condemn the killing of others for worshipping the wrong god. It also leaves me free to appreciate the religious works of humans, whether it’s a Baha’i shrine, a Christian oratorio, or a Muslim mosque. I may not believe the god(s) involved, but I can recognise the beauty of the work and the skill of the humans involved.

This is also why I can look back fondly on my experiences on the Baal vs Yahweh set. I may no longer believe the story of Elijah on Mount Carmel happened. But I know those days filming did happen, and I know that they were fun. I have memories of time spent with siblings and friends, of missed lines, of laughter, and even of penguins. And so I’d like to watch it again, though sadly I seem to have lost my copy.

However, one particular memory that stands out is the “fire from heaven”. As in the story, we poured water over our imitation bull, then needed to set it on fire. It turns out that when we poured enough petrol on it, it didn’t matter how much water we’d poured on first. Human ingenuity trumps divine intervention any day.

If God really wants to be known, he does it in a very odd way.

If we believe the story, in the time of Elijah it was fine to test God, and he had no hesitation using his power to prove to an indifferent nation that he existed. However, now he won’t even use his power to demonstrate his existence to people like former-me who begged for a reason to believe. And when we follow the evidence rather than assuming we were accidentally born into the right religion, he has no hesitation punishing us.

I don’t believe this god exists, but if he does I think he should keep his promises, take responsibility for his actions, and above all stop blaming us.